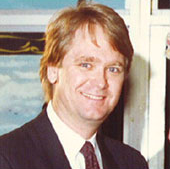 The Florida Public Transportation Association welcomes Tom Gustafson into our Hall of Fame.  While Speaker of the Florida House of Representatives in 1990, Tom Gustafson was instrumental in Florida’s transit systems attaining one of its greatest legislative triumphs – State Operating Assistance.

Tom Gustafson, a Democrat House Member from Broward County,  was appointed in 1982-84 to Chair the House Transportation Committee.  During those two years Gustafson became acquainted with the transportation issues of our state, and determined that roads and bridges were not the sole answer to the movement challenges facing Florida.  His legislative career immediately thereafter took him away from the transportation arena, as he chaired other committees such as Insurance, and Criminal Justice.

However, it was when he became Speaker in 1988, that he took an unprecedented step.  Gustafson created for the years 1988-1990, a full committee on Public Transportation.  This was in addition to the usual Transportation Committee.  He also appointed a champion of public transit as chair of the committee, Rep. James T. Hargrett, of Tampa.

In 1990 the opportunity presented itself for Florida’s public transit systems to begin receiving some form of operating assistance.  This was in the form of a broad initiative for a new motor fuel tax being considered by the Legislature.  FPTA and its member transit systems pitched in mightily to ensure that transit would receive a portion of the new funding.  But help was critical from the ‘inside’, and this was furnished by Speaker Gustafson and Chairman Hargett.  By virtue of Speaker Gustafson’s appointment,  Hargett, supported by the Speaker,  was able to be a part of the critical negotiating process.

The result was a new law creating the Transit Block Grant program, which provided no less than 14.7% of  the DOT Trust Fund to be dedicated to public transportation, and eventually to increase to a floor of 15%.  But even more importantly, longstanding  provisions in the Florida Statutes that specifically precluded state operating assistance to public transit were stricken.

It is for his long time interest and support of public transit, his unprecedented decision as Speaker to create the House Committee on Public Transportation, and his behind the scenes work during the gas tax negotiations that helped create the Transit Block Grant program, that we welcome former Florida House of Representatives Speaker,  Mr. Tom Gustafson, to the FPTA Hall of Fame Class of 2006.