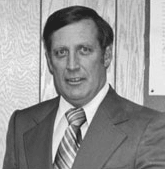 Wil Barnes was a model general manager dedicated to quality public service, and was a pioneer in the art of transitioning private transit providers into public transportation agencies.  He was instrumental in creating the PAT system in Pittsburgh, Pennsylvania in the early 1970s.

His Florida public transit legacy began in 1972 when he was selected to lead the Central Pinellas Transportation Authority (CPTA).  It is one thing to be appointed to an already-established and operating transit agency, but Wil Barnes had the greater challenge of building this transit agency from scratch.   Starting with no buses or employees, he provided the leadership in developing one of the larger and most efficient transit systems in the state of Florida.

In the early 1980s, Mr. Barnes was tasked with the responsibility to consolidate the CPTA with the St. Petersburg Municipal Transit System to create the Pinellas Suncoast Transit Authority (PSTA).  The difficult task of combining two separate agencies was handled masterfully through his skill, diplomacy, and affable nature.  As one former employee said, “I can not think of a single individual who knew Wil that did not consider him a friend.”  Mr. Barnes also led the successful effort to pass a county referendum to provide a dedicated source of revenue for the newly created PSTA.

Wil Barnes was a driving force in the creation of the Florida Transit Association, helping, with his friend across the bay, Harry Orr of HARTline,  to set up the initial meeting of the organization.  He served as President of FTA in 1983 after serving in the other association officer capacities.  He also helped lay the groundwork for what eventually was a successful effort to establish dedicated state funding in support of transit.

He was truly appreciated by his employees, many of whom credit him even after 20 years for their own long careers in transit.  As one employee who followed a successful career path at PSTA noted, “It didn’t matter if you were the Mayor of Clearwater or the Fueler/Cleaner, he took his time to listen to you and talk to you as if you were the most important person in the world.”

Those who knew Wil Barnes personally can attest that he was the classic, soft spoken “gentlemen” with an ease of accomplishment and work style that was greatly envied.

Wil Barnes, appropriately,  was elected to the American Public Transportation Hall of Fame in 1991 in recognition of his role in creating effective transit agencies in two cities in the United States.  Florida’s current transit managers stand on his shoulders as they improve the professional development of their staffs and increase transit services in their communities.

The Florida Public Transportation Association is pleased to admit Mr. Wil Barnes into our Class of 2008, FPTA Hall of Fame.