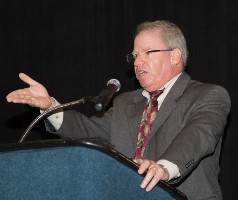 It can be argued that no one has had as much impact on the development and improvement of public transit throughout the state of Florida as Ed Coven. Ed was instrumental in cultivating an ongoing and ingrained position of state support for local and regional transit agencies through six governors and under nine Department Secretaries. As well as being transit’s primary voice inside FDOT, Ed represented the department on multiple AASHTO and APTA national committees, which each gave FDOT “national agency of the year” awards for its support of transit.

After graduating with a Master’s degree from Florida State University, Ed began his career as a transit planner for the Broward County Office of Planning and the Metropolitan Planning Organization. He helped Broward County Transit (BCT) achieve unprecedented ridership increases as the author of the first Transit Development Plan for BCT as well as the Transit Element of the Broward County Comprehensive Plan. While with Broward County, he also worked closely with FDOT in the development and initiation of Tri-Rail commuter rail stations in Broward County.

Ed decided to return to Tallahassee in 1990 when he joined the FDOT Office of Policy Planning as Modal Specialist and drafted transit and other modal elements of the 1990 Florida Transportation Plan. In 1991 FDOT’s Public Transit Office hired Ed as its Grant Manager and soon promoted him to Grants Programs Administrator in 1993. His skills were readily apparent to an agency that was ready to become far more multimodal. FDOT Secretary Ben Watts (also a member of FPTA’s Hall of Fame) appointed Ed as the Department’s State Transit Manager in 1996, a position he would serve with distinction until his retirement in 2019.

His accomplishments as the State Transit Manager are almost too many to mention, but too important to leave out. He led or provided vital assistance to virtually every aspect of transit’s growing presence in the third most populous state in the nation. The many accomplishments fall into three primary categories: (1) Research and professional development (2) Policy and planning and (3) Enhancement and expansion of transit funding and programs throughout the state.

Enhancement and expansion of transit funding and programs throughout the state

It is hard to imagine a more productive and effective proponent for public transportation within FDOT, but one of Ed’s most rewarding accomplishments was supporting the efforts of an incredibly talented and long serving team of professionals dedicated to helping advance and improve public transportation in the State of Florida. We are fortunate that they have been inspired to follow Ed’s legacy of service to the advancement of public transportation.