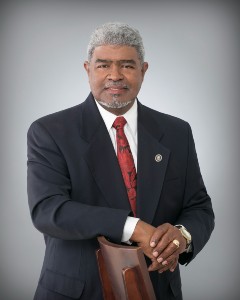 The Hall of Fame Inductee for 2021 is Michael J. Blaylock. He is an internationally recognized thought leader and senior executive with over 40 years of experience in the transportation industry.

Blaylock began his extensive career in 1982, with the Jacksonville Transportation Authority (JTA), the first expressway authority in Florida and one of only four agencies in the country with responsibilities for building bridges, highways and operating a public transport system. He began his tenure with the JTA as a Grants Administrator and later promoted and served in a host of key leadership positions which led to an appointment as the agency’s sixth CEO in 2002, and first African American chosen to serve in this capacity until his retirement in 2012.

His expansive career of “firsts” and a persistent passion for excellence in the transportation industry, resulted in establishing Blaylock Transportation Group International (BTGI), where he now serves as the principal and CEO. During his tenure with the JTA, he managed more than 700 employees and directed the agency’s modernization program and managed its largest capital highway/transit program of approximately one billion dollars. The agency amassed a reputation for its stellar ability for innovation and executing highway/engineering and transit projects on time and within budget.

Additional accomplishments noted during his tenure with the JTA included positioning the agency as a regional transit service provider/agency inclusive of planning for an intra-city multimodal facility, Jacksonville Regional Transportation Center (JRTC), Bus Rapid Transport System (BRT), Relocation of Greyhound and initial planning for a potential return of Amtrak services to the Prime Osborne Convention Center. Also successfully completed Phase One of the agency’s first Transit Oriented Development (TOD) project (Kings Avenue-Hotels). Successfully implemented one of the first demonstrated use of a fully automated “People Mover” technology in the U. S. public transport market. Initiated the planning, design and implementation of lighting the Fuller Warren, Acosta, Main Street and Hart Bridges, beautifying the City’s skyline as host to the 2005 Superbowl. Blaylock served as Vice Chairman of the Superbowl Transportation Host Committee.

He also served as President of the Florida Public Transportation Association (FPTA) and Vice Chairman of The Transportation and Expressway Authority Membership of Florida (TEAMFL). During his tenure as President of the FPTA, the association was successful in launching the first statewide bus procurement initiative with JTA serving as the host agency. He is also a founding member of the local chapter of COMTO and have received numerous awards and recognitions over the course of his extensive career from a host of local, state and national organizations for outstanding service and as a visionary thought leader. Today he is semi-retired working in his consultancy practice, travels around the world with his wife, Patricia and spends time with his grandchildren.